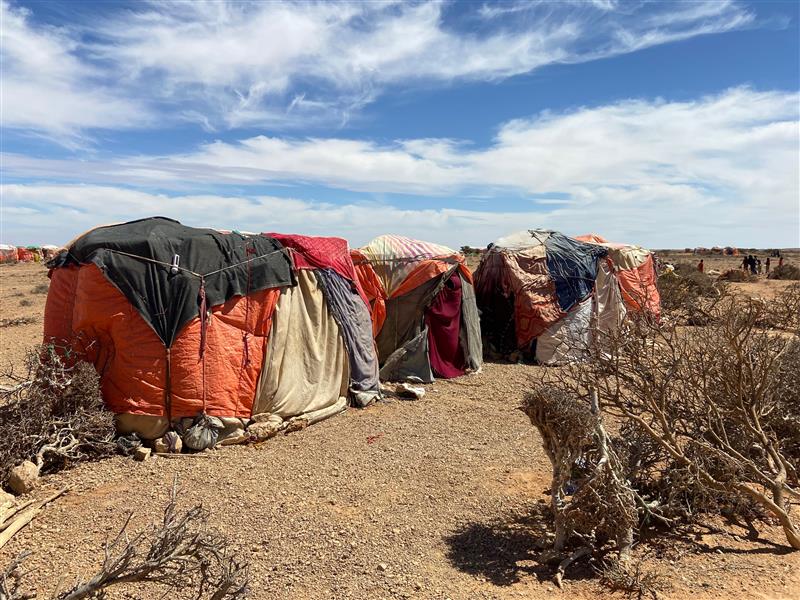 Suffering the results of environmental factors

Somali farmers suffering the results of environmental factors not of their making.

I grew up on a small farm in rural Tipperary. When I talk about it, my wife is convinced I grew up in another century from her. I remember my grandfather ploughing a field with a horse drawn plough, I remember taking tea to the meadow in a glass bottle wrapped in a sock to keep it warm – I’m only 45 in case you are wondering! I also have a vivid memory of my father crying into his woolly hat the day he was told his entire herd of 28 animals would have to be slaughtered because of bovine tuberculosis - the results of an environmental factor not of his making. The loss of the animals was not just a financial loss, but also a psychological one - a farmer is intensely linked with their livestock - but this was the first shock he had experienced and at that time there were reserves and state support.

The farmers I met in Puntland, Somalia recently, are also suffering the results of environmental factors not of their making. But they are of our making -  the climate crisis. The state of Puntland is nearly three times bigger than Ireland and has similar population levels. The CO2 Emissions per capita could not be more different; Somalia’s emissions per capita is 0.09, whereas Ireland’s per capita emissions are 8.32. The people of Somalia are buffeted by the impacts of climate change caused by the fossil fuel development we and other rich nations built our comfortable lives off. Somalia is currently in the middle of what’s looking set to be their fifth failed rainy season in a row. The country is experiencing its worst drought in over four decades and it is decimating people’s livelihoods.

Recently I spent time with pastoralists in Hajikheyr Internally Displaced Persons’ Camp. They have lost everything. Women like 38-year-old Shuki, a mother of 5, who 2 years ago had 90 goats and was able to look after her family. Due to the drought she has only 7 surviving goats and has had no other option but to move into the IDP Camp in the hope of support. Unlike my father who had reserves and state support, Shuki has nothing left. Repeated climate-induced shocks have depleted her resilience and at this point she is unsure of how she will recover. She finds herself in a temporary home with no access to drinkable water, toilets or a school for her children. We have provided Shuki with a regular cash transfer of $78 per month so she can provide for her family, but that project is unfortunately coming to an end now and Shuki is waiting to see what she does next.

I remember the excitement the day the first new heifer arrived on the farm after the required quarantine period – a gift from my dad’s cousin. Something to help him get restarted. In normal times this would also be the case in Somalia; with communities based on strong kinship ties and mutual support, families would help each other to rebuild. But this is not the case anymore – climate change has eroded entire communities’ resilience. Shuki’s is not an isolated case; this is widespread.

Unfortunately, the climate-induced drought is having broader impacts, even on children’s education and safety. Sitting with the community in Biyo-cade village, I was reassuring them that there is nothing wrong with their 2-roomed school – after all I went to a small two-roomed school and I turned out fine! The difference between me and the children in Biyo-cade school is that when my father lost his entire herd, I wasn’t forced to leave school. I was lucky to be able to continue my education and complete schooling. At all the schools we visited this week we heard that attendance numbers were down. Entire families had to migrate, either looking for pasture and water for their animals, or into IPD camps, as they had lost everything. We heard of families walking 600 kilometres in search of pastures - that’s Carndonagh, Co Donegal to Cahersiveen, Co Kerry - and finding nothing in-between. There are worse consequences. We also heard of increased rates of rape, gender-based violence and violence against children. Climate change is robbing children of their childhood.

The people of Somalia, and the wider Horn of Africa, need immediate support to cope with the current hunger crises, but they will also need longer-term support to help them rebuild their lives. Ultimately they need all of us to keep our climate promises – we need ambitious climate action now, to help prevent ongoing climate damage.