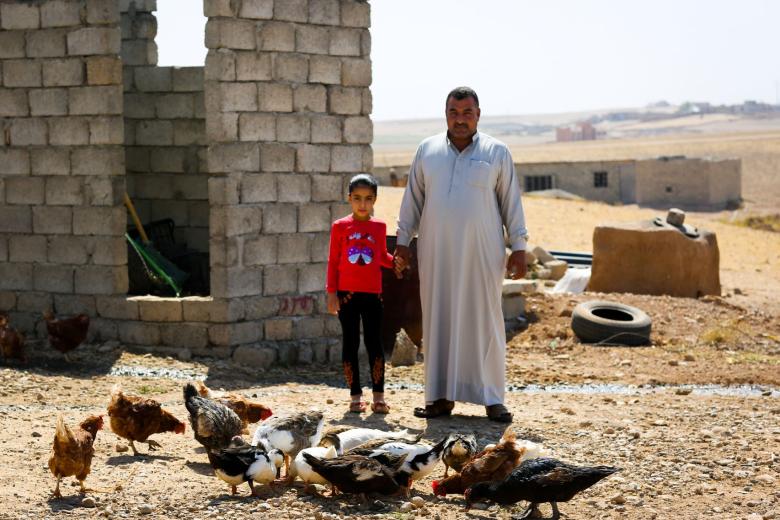 Climate change is undermining livelihoods and the possibility of recovery.

On May 18, 2022, WFP and UNHCR announced that 260,000 Syrian refugees in Iraq will lose access to basic food without urgent funds being injected into Iraq’s overall humanitarian response, which as of today is only 18% funded.

However, this announcement only scratches the surface of the climate-induced challenges and fallout facing Iraq. Likely, thousands of internally displaced Iraqis who remain in camps will also lose the cash assistance that they used for staving off hunger. There is also the risk that a significant portion of returnees and host communities across the country who are suffering from food insecurity and lack of livelihood opportunities will also see their livelihoods and food security threatened and be pushed to become secondarily displaced. Again, all of this is happening while humanitarian assistance is contracting.

The impending food security crisis comes when drought and water scarcity have decimated food production for millions. A  report by Oxfam in Iraq, Save the Children Iraq and World Vision Iraq entitled “Unfarmed Now. Uninhabited When?” released in April 2022 found that rural households are no longer able to eke out a living from the land:

‘I’ve been a farmer forever. I got this land from my grandfather. There is no water now, so we cannot work on this land. My sons are now working as labourers.’ – Male farmer, Diyala

Once the breadbasket of the ancient world, Iraq is now the world’s fifth most vulnerable nation to the effects of climate change due to sharply rising temperatures, intense droughts, declining precipitation, desertification, salinisation, and dust storms. Compounding these trends is the threat of water scarcity due to poor governance of resources and a decline in the flow from the Euphrates and Tigris rivers.

In 2022, all of these climate-related challenges are hampering Iraq’s agricultural sector, which provides livelihood to up to 25% of Iraq’s population. In 2021, only half the available arable land was used by farmers across the country due to the lack of water and seeds as well as government policies limiting the area that can be used, halving the production potential. This was further reduced in places like Ninewa when 70% of the crop failed.

World Vision works in Ninewa with returnees and host communities who lost everything in the conflict to provide livelihood assistance. Crop failure in Ninewa translated to a 50% loss of crops for the Kurdistan Region of Iraq, which usually produces surplus cereals for the country. In addition, the failure of local food production has led to Iraq importing food and fodder, which has increased food prices and pushed up the cost of living.

Farmers, feeling the pinch of higher food prices, lack of water and decreased agricultural productivity, have started to migrate to urban areas in search of casual work to make ends meet or adopt negative coping mechanisms such as child labour.

Our children left school and went to work; it is all because of the deterioration in agriculture. A farmer, in Mosul

The scarcity of opportunities and services is also fueling popular demonstrations and heightened tensions between communities. As a result, the risk of resource competition, armed groups’ recruitment and a return to the violent conflict are more pronounced now than even a year ago.

"If livelihoods are interrupted, people can’t produce what they eat. With no source of income, people will go onto the streets, and (…) conflict will happen." – Representative of an International NGO.

It is for this reason that Iraq mustn't be forgotten on June 17, 2022, when the world marks the Desertification and Drought Day focusing on drought and early action to prevent disastrous outcomes. With humanitarian funding vanishing for Iraq, where more than 10% of the population is in need, this fragile context is at a tipping point. Immediate action to prevent disastrous outcomes in Iraq is still possible. We cannot ignore the signs and alarms for the sake of the children of Iraq.