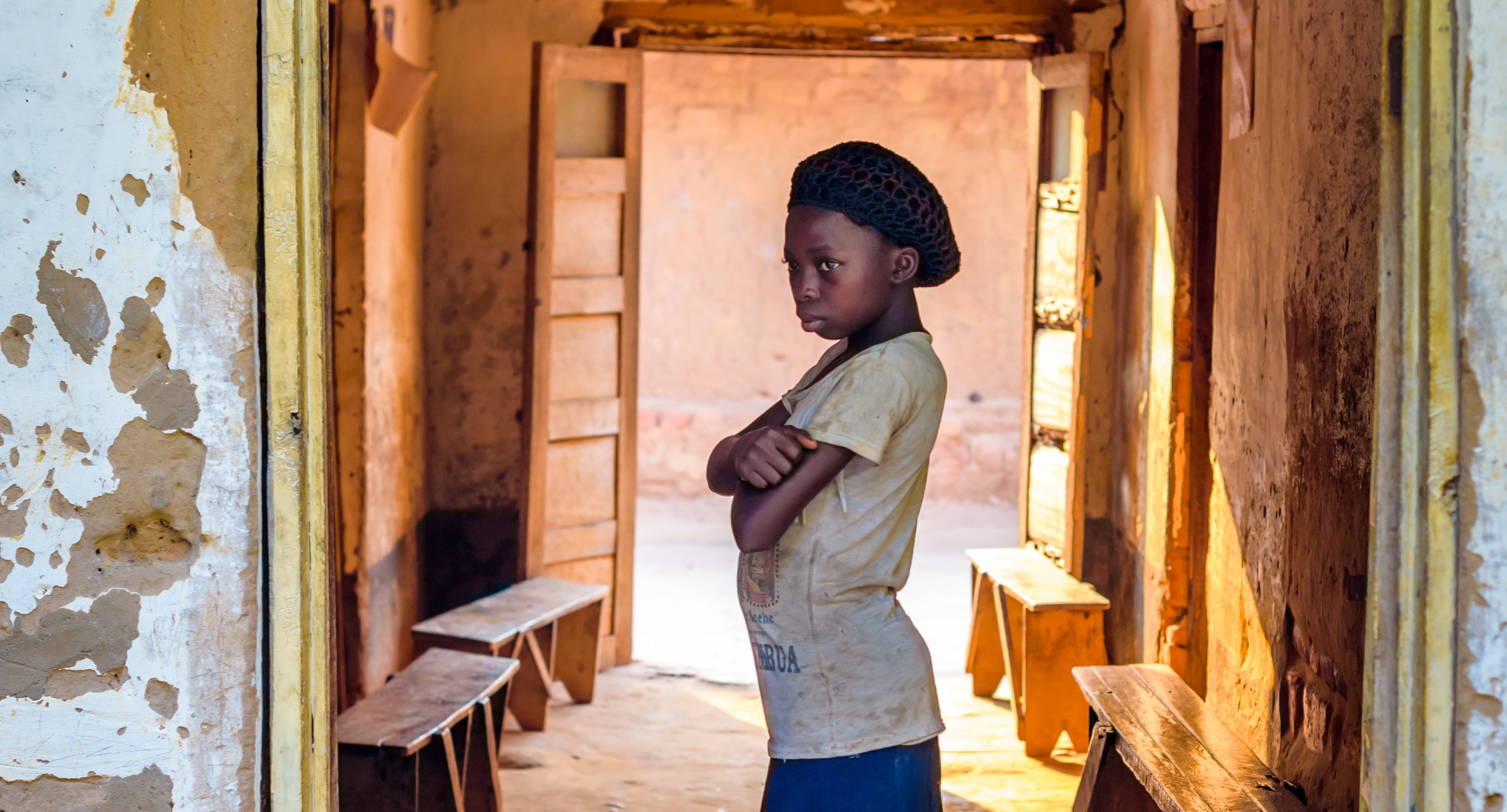 14-year-old Marie lives with her father, Alexandre, her mother, Ntumba, and her siblings: 4-year-old Mubuyi Tshimanga, 6-year-old Musungayi Andre, 8-year-old Munamba Angel, 10-year-old Kankonde Moise, and 12-year-old Kena Tshimanga. With grandparents, aunts, and cousins, her family of 13 live in a two room hut with a thatched roof. A few wooden chairs are the only furniture the family have.

Marie lives in a small village outside of Kananga, Democratic Republic of Congo, DRC, called Tubuluku, which means ‘antelopes’. Marie is a bright young girl with big dreams, but there is a sadness in her eyes. Marie’s mother is in the nearby health clinic with a staph infection that has caused a huge abscess on her right side. It has become very serious. As a result, Marie has taken on many of the household duties. At the age of 14, she’s forced to take on the role of an adult. After cooking for her brothers and sisters, she sweeps up the husks from palm nuts she crushes. A resourceful and clever girl, she saves the husks to use as kindling for the fire. Marie and her siblings all sleep together in one room, huddled together for warmth, covered by an old, torn mosquito net.

Marie’s family was desperately hungry when World Vision visited them. Because her mother is sick and her father spends his days tending to her at the clinic, there is no money for food. Because there isn’t any cassava flour and cornmeal to make fufu (a Congolese staple - a bread-like dish), Marie and her siblings pick potato leaves from the garden. Marie sharpens a knife on a rock and uses it to chop the leaves into small pieces. She holds a bunch tightly in her left hand because she knows how precious these ingredients are – they will provide

food for her starving family. Her cousin, also named Marie Ngalula, pulls some wood from a pile and arranges it between three rocks that will hold the pot. She yanks some thatch from the roof and uses it for kindling.

Because they have no oil or salt, the recipe is uncomplicated. The greens are stuck in a pot of water and boiled until they become soft. They look like spinach when they’re done. As luck would have it, a kind neighbor sends a few drops of oil which Marie mixes with the water. Her grandfather sends a little fufu - a huge treat for the empty bellies that share the small pot of greens.

Later, Marie visited her mother at the clinic. She didn’t want her mother to worry, so she didn’t tell her how bad things had become in the house.

“We’ve gone three days without eating anything but potato leaves.” Marie said, weak, but still smiling at her sick mother. “We are lucky to have that. We’ve had to endure the hunger, but we are still hopeful that things will change. We will be OK, we will manage, Mama. Hunger never killed anyone.”

Unfortunately, she’s wrong. According to the World Health Organisation, very single hour of every day, 300 children die because of malnutrition. It's an underlying cause of more than a third of children's deaths – 2.6 million every year.

Marie and her siblings went to the World Vision Child-Friendly Space where, thanks to a newly introduced feeding program, they each got a nutritious bowl of porridge made from soy, maize, peanuts, maringa and sugar.

Marie’s father is deeply upset and disappointed in his inability to send Marie back to school.

“Marie is very intelligent,” he said. “She has a brilliant mind, and I wish more than anything, that we could afford to send her to school to improve it. I’m so proud of her. Not only is she very clever, she is also a very kind person. I’d like to send her back to school but I can’t afford it. I’d like if she could further her studies even as far as university so that she can help me take care of her brothers and sisters someday.

Marie and her friends often play on the grass in front of the school that they can’t afford to attend. It breaks my heart, seeing the barrier that the cost of education will have on her life. My dream would be to see her reach her full potential and go to school.”

Marie’s father makes and sells charcoal to earn money for the family. He gets about 6,000 Congolese francs per bag and he can do about 1 bag per week. It’s not enough to support the family so Marie helps by selling palm nuts. Marie sits on the ground next to a bowl of palm nuts she’s collected.

Marie walks the main road in front of the airport with her bowl of nuts. She squats in front of a local market, just across from the main gate. A woman with a small, green bucket stops. Money changes hands and Marie fills the woman’s bucket about halfway. It’s all the nuts she has today. Marie gets 800 francs for the transaction - that’s about 50 cents. She needs about a thousand francs to buy enough cassava flour to last the family for two days.

Marie walks about a half mile down a steep, narrow embankment to a capped spring that provides the community water. She carries a cast iron pot on her head. When the pot is full she climbs the smooth, hardened clay of the path that leads home. She does this several times a day, usually with a friend or a cousin.

Later that day, she walks to the clinic. In the clinic, Antoinette, Marie’s mother, sits on a straw mat in a nearly empty room. A small bamboo cot off to one side is about 6 inches off the floor. Antoinette is sweating, tired and weak. She looks very unwell. Marie sits next to her and they talk.

“I don’t know if I’ll be here to help you grow up.” Antoinette said. “Pray that God heals me. The nurse is treating me antibiotics and she said that my chances of recovery are good. Marie, I want you to have a better life than I did. You have so much potential.”

Marie doesn’t want to leave her mother, but she knows she must go home to look after her family. She leaves the clinic with tears in her eyes, but wipes them away quickly. She doesn’t have time to let herself get upset. There are more pressing issues to deal with, like how she’s going to feed her younger siblings this evening.

There are lots of children in Tubuluku. About 40 of them gather on the grass of the school across from Marie’s house. Marie leads the singing as the kids hold hands, move in a circle and sing loudly. Sometimes they all collapse into a fit of giggling. For the first time since we’ve met her, Marie smiles widely. She sings. She dances. For a time at least, she can be a kid again! She looks so happy and alive! The World Vision staff are amazed by this young teenage girl’s strength, resilience and spirit. She has shown again and again her resourcefulness, her positive outlook, and her determination to help her family as much as she can.

Like many people here, Marie is Catholic. She said that when she has clean clothes, she goes to church at St. in Tubuluku. She loves to sing and sings a little song from church at the World Vision Child Friendly Spaces. In the Child-Friendly Spaces, Marie lets go of the weight of the world which she carries around with her. She lets go of her worries. She lights up, laughs, smiles, and has the chance to just be a kid!